Surrendering is a Powerful Skill; as is Having Boundaries.

Surrendering is something I have a lot of experience with, while meditating. Having recently returned from an excursion in India, I must say how grateful I am that I deeply knew how to surrender before I went. I also witnessed the power of boundaries and the importance of the ‘word’. Here is my story. I traveled with a girlfriend and I must say this is no ordinary girlfriend. Having heard her stories of travelling to India and Nepal over our friendship of 23 years. I knew to seize the moment and jump on a plane with her.

Surrendering is a skill of soul flexibility

We arrived in the chaos of India having frozen the money supply! Fortunately, we could exchange a maximum of $50 at the airport and 6 days later we managed to find money. We were allowed to withdraw $29 each. Prior to that, we stood in ATM line-ups for hours to have no success. There was no getting upset.  My friend would say, ‘This is India’ and she would laugh. We made the best of it as India is a cash economy.  Due to her friendliness and manner, we met great people in the ATM line ups. Being open and conscious on our journey. We gave up things we wanted to do and surrendered to what India wanted us to do. That was our mindset. Let go and follow India’s lead. Really, what a great way to live life, I see now.

Doing the transformation work that I do, helps reset my approach to obstacles. A teacher of mine, Samuel Sagan says ‘you react, you die.’ Yes, in some situations this is the truth, but here I saw what he meant as many Western people that we met reacted to parts of India. I quote one person we met who said she ‘couldn’t wait to get out of this hell hole.’ This dear soul had not learned the art of to surrendering before she arrived and was stuck in her reactions. 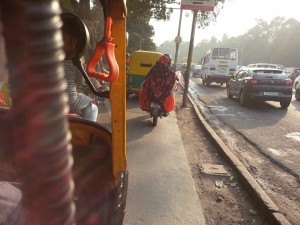 Delhi on a sidewalk

I immediately surrendered to the pollution of Delhi which was at its all-time high. Surrendered to the crazy driving, but soon realized as crazy as it was I never saw an accident and never heard a driver complain like they do back home. In fact, the people of India really know how to surrender.

A huge benefit to being able to Surrender

I quickly noted that the land was very feminine and I could just lean on her to guide me. To have her hold my energy. If one has not practiced the art of surrendering, then it could be a very different trip as arriving in the chaos of India could be overwhelming.

Learn How to Surrender in a Deep Mystical Way

If you have not already been doing so, then it would be my suggestion that if you want to go, start to surrender in your life now. After all surrendering is a huge step in manifesting. For starters, build a meditation practice and let your energy lean back while being in a good vertical posture while sitting in lotus or half lotus. Not leaning on the back of a chair, but letting your etheric energy lean on the space that is in you and around you at all times. If you don’t know what that rich space feels like, then open to the wanting to know. 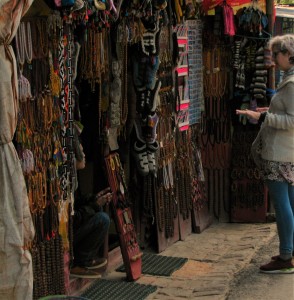 Surrendering Does Not Mean You Don’t Have Boundaries

With this said about surrendering, I must say that I saw how boundaries and the power of the word were so important. For one thing, if you have been, you will know the utter nagging that happens as soon as a vendor sees a Western person. “Lady come into my shop and look. Looking costs nothing.” Store after store. I don’t know why they all use the same line. If you do go in they are incredibly good sales people. Really, some of the best sales people in the world. Being comfortable with ‘no’ is important in a place like India and not worrying about people’s feelings is vital. One needs to be strong and ideally in your belly which is your power house of energy and match their energy. It does not seem like they are in their bellies but by golly they are.

The Power of the Word and Boundaries

Speaking of matching energy and boundaries. I was meditating in a cave in India. This cave was the cave where it is said the Sage Vasistha reached enlightenment. The rule of the cave was no speaking, or taking pictures. Around my third hour of deeply meditating some people came in and started to whisper, thinking they were not actually talking, I imagine. They broke the space. From the deepest part of me I looked at them and said ‘No’. The next thing I knew I was in the Cosmos. I spoke from the cave or I matched the energy of the cave. By golly, by using the power of the word that was one of the best meditations of my life and I have had some fabulous ones. Eventually, it was time to go as the Monks were closing the cave, but I couldn’t move. I was so internalized that they kept the cave open for another half hour. I got to be in the cosmos of the cave for that time uninterrupted. Later, in an ATM lineup I learned from a fellow kindred spirit that the Sage is said to be in the Cosmos!

With that event, I once again saw that boundaries and saying no has a very important place.  I am truly still reaping the rewards of having pushed a boundary and broken a rule of no speaking.  After all there is a time to surrender and a time to act. Schedule your Session that specializes in meditation, regression, soul retrieval, clearing energy blocks and helping people realize the divine feminine consciousness. Helping people step out of reactions and learning how to surrender to grace.